To plan and execute programs and services that will minister to people of all ages who want to know Christ and to make Him known using various methods such as education, sports, and the arts.

The purpose of New Dawn International Ministries, Inc. is to provide opportunities to share the love expressed to us by God on the new dawn of Christ’s resurrection, thereby fostering reconciliation to God and man through rebirth, rest, recreation, and renewal of mind, body, and spirit. V. P. Everett came to Walker County to farm in 1918. He was granted a deed to the 120 acre property in 1920. His family of six children was raised on the land and his fourth child, J.P. purchased the farm after World War II. J.P. eventually became a welder in Chattanooga but continued to farm and raise his five children. He added an additional 300 acres in 1965, a part of which Camp New Dawn occupies.
When J.P. died in 1981, the next generation divide the land. It has subsequently changed configurations until the ownership now rests with Jack Everett and Jennie Everett Chandler (J.P.’s children) and Jake Everett (a cousin).

A nagging dream from Jennie’s childhood surfaced and led her to buy her sister’s land in 1987. After much prayer God worked some financial miracles and strengthened the childhood vision of a retreat center that would serve small churches and meet needs of missionaries in transition, plus a camp for young folks. In one all -night prayer time, Jennie felt God’s presence in a special way and was impressed with the name, New Dawn, as a promise that His mercy is new every morning (Lamentations 3:22-23). She knew He would be faithful to bring “new dawn” to her family and to those who came to stay at New Dawn. (Psalm 30:5–Weeping may remain for a night but rejoicing comes in the morning.) As prayers were offered and answered, it was decided the organization should minister primarily as a camp and retreat center, but could be expanded to publications, mission work and other education and art pursuits. Thus, New Dawn International Ministries, Inc, was formed in 1997, which resulted in a week of soccer day camp in 1998 with 14 children attending. A house already on the land became the retreat center and later the camp director’s residence. As a tribute to her ancestry Jennie ensures campers and guests continue to enjoy a farm experience on the original part of the farm. A published author at the time, she began to direct all income from writing to New Dawn International Ministries, and published a quilting brochure written be Edie Cary. Her book, Keepers at Home, released in 2005 is still available.

The first year, facilities were a shade tree and soccer goals in a hay field. An all-purpose building with kitchen, meeting space and restrooms was completed in 1999. Day camps were held for one, then two weeks until 2004 when four cabins were added, providing sleeping space for 32. In 2005 the fire pit, amphitheater and a prayer garden were added. In 2007 a small fishing lake was dug and stocked to the delight of our campers.

Jennie serves as Executive Director of New Dawn International Ministries, and also was Camp Director until 2015, Alan Chandler assumed the role, joining his wife Carrie, program director since 2009, as the core staff. Jennie’s husband, Dick is the volunteer maintenance director and grounds keeper. Many volunteers and short-term staff keep everything going. Support to minister to at-risk children comes from churches, individual donors, rental fees, and fundraisers. Five and a half weeks of camp programming are now offered for children first through twelfth grades including All-Kids, Middle School Adventure, Mini-Camp, Cove Adventure for teens, Sports Camp, and Civil War Camp. Our aim is that no child will be turned away due to lack of finances. An average of 80 campers are served each year, with about 50% receiving some financial assistance, and another 300 guests come for retreats, birthday parties, weddings, showers and corporate meetings, etc.

We desire to be “a place to grow the soul” via small group retreats/youth camp, and maintaining international contacts to see who God would have join in this venture. In addition to managing Camp New Dawn, NDIM provides a writing ministry and seeks to support missions with networking, prayer and resources including lessons by missionaries during each week of camp. Carrie has established and directs the McLemore Cove School of Traditional Arts which offers classes in handicrafts of years gone by.

In 2017 New Dawn International Ministries entered a partnership with Three Circles Foundation as the Chickamauga site for a ministry to boys from difficult situations. Praise God for his provision and these opportunities to share His love.

We believe the Bible is the inspired, inerrant Word of God in the original writings, and is the sole authority for the
Christian in faith and practice. (Exodus 20; II Timothy 3:16-17; Hebrews 4:12)
We believe there is one true God, the eternally existent creator of the universe, and redeemer of mankind.
He has revealed himself as Father, Son and Holy Spirit. (Genesis 1:1; Exodus 3:14; John 3:16-17;
Romans 8:9)
We believe in the resurrection of the body and that man’s only hope for redemption from an eternal hell is
through the atonement of Jesus Christ, the Son of God, who was born to a virgin, lived a sinless life, died
on the cross for all mankind, was resurrected from the dead, and exalted to the right hand of the Father to
intercede for his followers. (John 14:1-4, 6; Romans 8:1; Ephesians 2:8-9; I Corinthians15: 50-58;
Hebrews 1:3)
We believe there is eternal security for those who trust in Jesus Christ as Savior. (John 10:27-29; Romans
8:38-39)
We believe the Holy Spirit ministers to mankind to convict, regenerate, indwell, enlighten and empower
believers, thus equipping them to obedience to God. The Holy Spirit baptizes believers into the Body of
Christ at the time of regeneration yet fills believers many times.
(John 15:26; Acts 4:31; Romans 8:26; Ephesians 5:18-21, I Corinthians 12-13)
We believe in God’s plan for marriage between a man and woman. (Genesis 2:20-25)
We believe in the church as the spiritual body of Christ, the Head, and that participation in a local church
is essential to continued spiritual growth. (Romans 12:6-7;
I Corinthians 12; II Corinthians 9:7; Hebrews 10:24-25)
We believe that Christ will come again to establish an earthly kingdom, before God tosses Satan into the
lake of fire and makes everything new. (Revelation 19:11; 20:4-6,10, 21:1-8)
Therefore, in practice we are committed to:
–acknowledging Christ as personal Lord and Savior
–sharing the Gospel of Christ at every opportunity (Matt 28:19-20)
–glorifying God through worship, prayer, and obedience to His commandments by the empowerment of
the Holy Spirit (I John5:3)
–building relationships within our family and with others based on the Biblical teachings of love,
forgiveness, and accountability
–supporting a local church with prayer for the leaders and active participation with time and resources.
–loving the Lord our God with all our hearts, minds, and strength
–loving our neighbor as ourselves, sharing resources and time as God gives opportunity
–living separated unto the Lord and abstaining from all appearances of evil. (James:4:7) 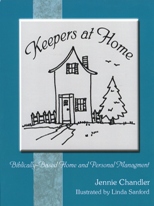 Get a spiritual perspective on everyday household chores by using Keepers At Home as a group Bible Study or as an individual study.  Discover ways to be creative  in setting goals, organizing, time management, meal planning, financial management and more.   Available at Amazon.com.